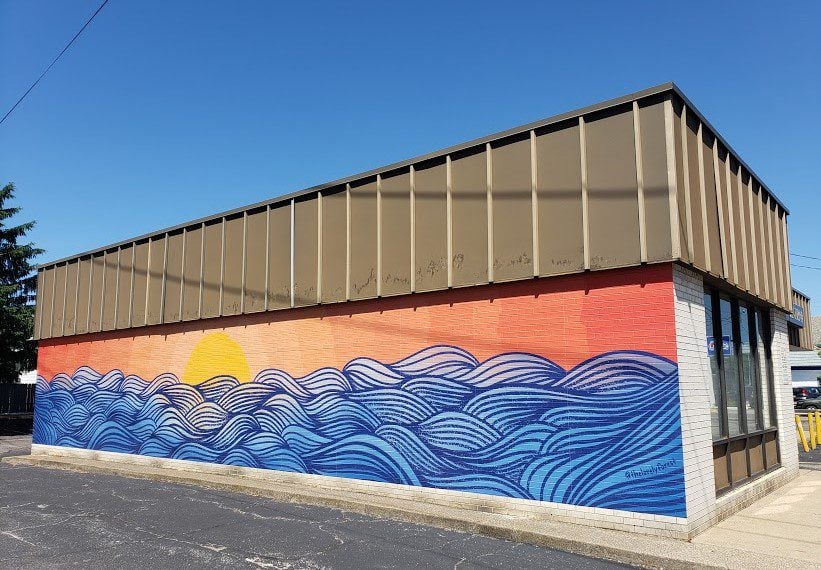 When city leaders, civic-minded residents, local governments, small businesses and a nonprofit organization come together for the sake of community vibrancy, good things are bound to happen.  Such is the case with LakewoodAlive’s Warren Road Beautification Project.

Venture through the heart of Lakewood near the intersection of Warren Road and Madison Avenue and you’ll notice a transformation has taken place.  Thanks to a $50,000 Community Development Supplemental Grant from Cuyahoga County and a partnership with the City of Lakewood, phase 2 of the Warren Road Beautification Project has created a rejuvenated gateway into Lakewood’s commercial districts featuring an improved pedestrian environment and significant public art components. Phase 1 brought improvements to the intersection of Warren Road and Detroit Avenue. 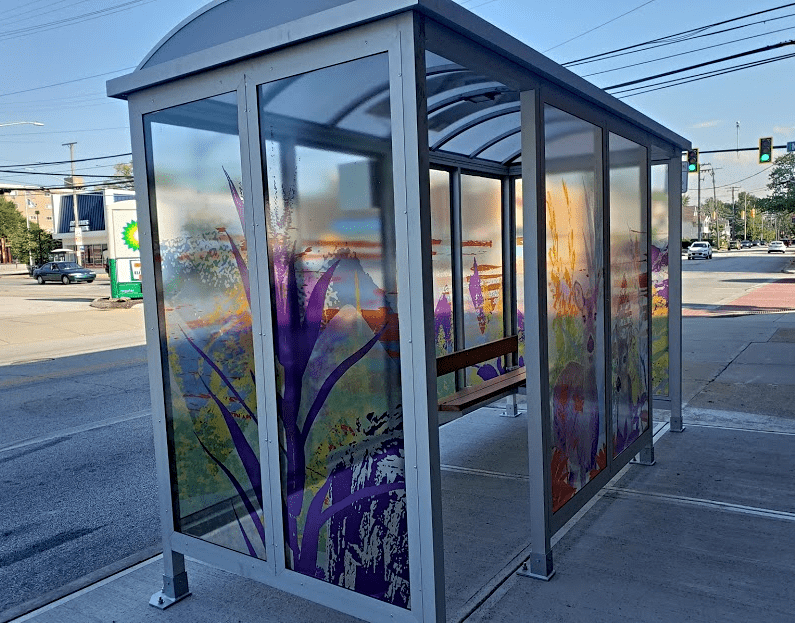 Phase 2 of the Warren Road Beautification Project has resulted in a variety of improvements throughout this well-traveled intersection.

The prominent intersection at Warren and Madison now incorporates two public art murals, an artistic bus shelter, new crosswalks and 15 new trees.  Still to come are the addition of eight bike racks and two artistically-wrapped traffic signal boxes.  What started in 2018 as a conceptual vision is now a vibrant reality for Lakewoodites and visitors to enjoy.

“The success of Phase 2 of our Warren Road Beautification Project speaks volumes about the unique collaborative nature of our community, and we are truly grateful to our many terrific partners, including the City of Lakewood, Cuyahoga County, the Greater Cleveland Regional Transit Authority, local artists April Bleakney and Stephanie Crossen, Fifth Third Bank, The Doughnut Pantry, Scherba Industries and many tremendous volunteers,” said Ian Andrews, Executive Director of LakewoodAlive.  “This project has been more than two years in the making, and it’s a testament to our volunteer Design Committee, chaired by Rob Donaldson, that we’ve been able to guide this project to the finish line.”

Two new art murals serve as the centerpiece of this project.  Talented local artists April Bleakney and Stephanie Crossen were chosen to create this public art following a competitive selection process that started last August with a request for proposals. 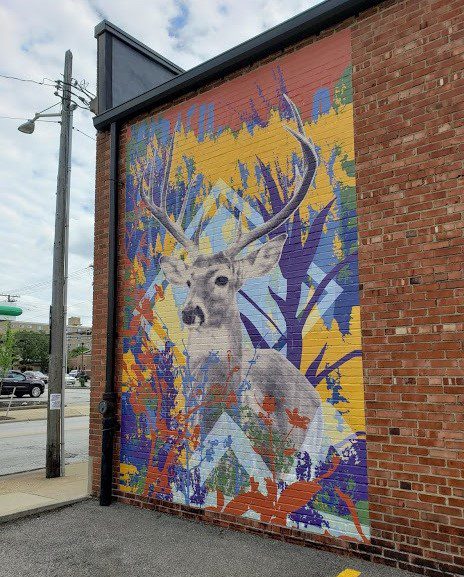 April’s art mural depicting an antlered deer with a colorful background was installed on May 27 on the northern wall of Fifth Third Bank.  She was inspired by an encounter she had with a deer while in Yosemite National Park, and came to appreciate the peacefulness this animal symbolizes.

“The deer not only is native to Northeast Ohio, but is native to all continents except Australia and Antarctica,” said April. “In researching qualities the deer represents over time and across cultures, you find: firm but gentle, serene and peaceful in times of stress, strong and brave when necessary, highly aware and instinctual.  They are a symbol of kindness even during the most challenging times and are often seen as messengers of change.”

Stephanie’s art mural featuring a picturesque sunset (or sunrise, depending on your interpretation) was installed on June 8 on the western wall of The Doughnut Pantry.  For this 54-foot-long mural, Stephanie was inspired by the stunning sunsets she’s witnessed at The Solstice Steps and wanted to offer community members an eternal sunshine to bring joy on cloudy days.

“I’ve lived in Lakewood for 10 years and I love it here,” said Stephanie.  “I wanted to create an abstract image of the summer sun on beautiful Lake Erie that could be interpreted as either rising or setting.  The fact that people stand and applaud a sunset at The Solstice Steps really exemplifies what a wonderful community this is.  But since this mural is located on The Doughnut Pantry, perceiving it as a sunrise also feels appropriate.”

Work on phase 2 of the Warren Road Beautification Project began in earnest shortly after phase 1 of the project at the intersection of Warren and Detroit wrapped up during summer of 2018.  Months of planning and collaboration with partners paid off with the awarding of a county grant focused on improving the Warren-Madison intersection. 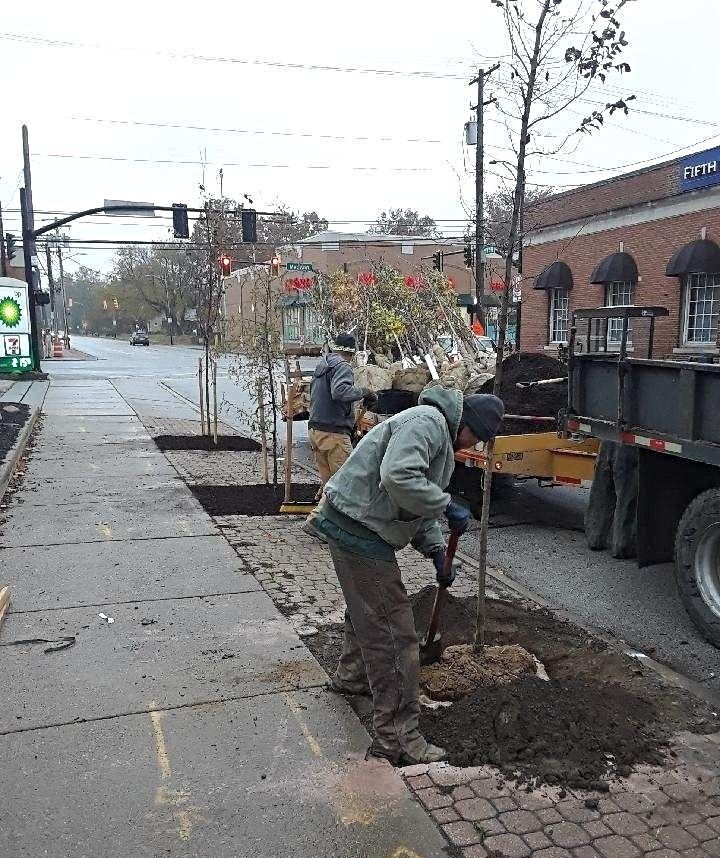 The project kicked off with the planting of 15 tree last November.

Phase 2 of the project kicked off last November with the planting of 15 broad-leafed trees at a variety of locations throughout the intersection.  Following a slow-to-end winter that saw snow into May, the project continued with the installation of both public art murals in late May and early June.  Scherba Industries completed both installations using a sophisticated, digitally-printed wall wrap technique.

The project continued in mid-June with the installation of new crosswalks across the Warren-Madison intersection.  These attractive, brick-looking crosswalks are designed to make this busy intersection safer and more pedestrian-friendly, offering texture to assist visually-impaired community members with crossing the street. Made of a thermoplast material, the crosswalks are adhered to the surface and were installed in one day for reductions in labor and material costs.

A sleek new artistic bus shelter soon followed, with installation taking place in mid-July at the northwest corner of Warren and Madison near Fifth Third Bank.  April Bleakney designed this shelter wrap to complement her nearby deer-themed public art mural.  Lakewood’s newest bus shelter – the product of a partnership with the Greater Cleveland Regional Transit Authority – features night-time illumination made possible by solar cells on the roof.

The final steps of this project – the addition of bike racks and two artistically-wrapped traffic signal boxes – will take place in the near future.

Envisioned as a three-phase project starting in 2016, LakewoodAlive will work with the City, County and neighborhood stakeholders on Phase 3, focusing on the Warren Road and Lakewood Heights Boulevard intersection in the coming years.

LakewoodAlive is a community-centered nonprofit organization striving to foster and sustain vibrant neighborhoods in Lakewood.  For more information regarding phase 2 of the Warren Road Beautification Project, please contact LakewoodAlive at 216-521-0655. 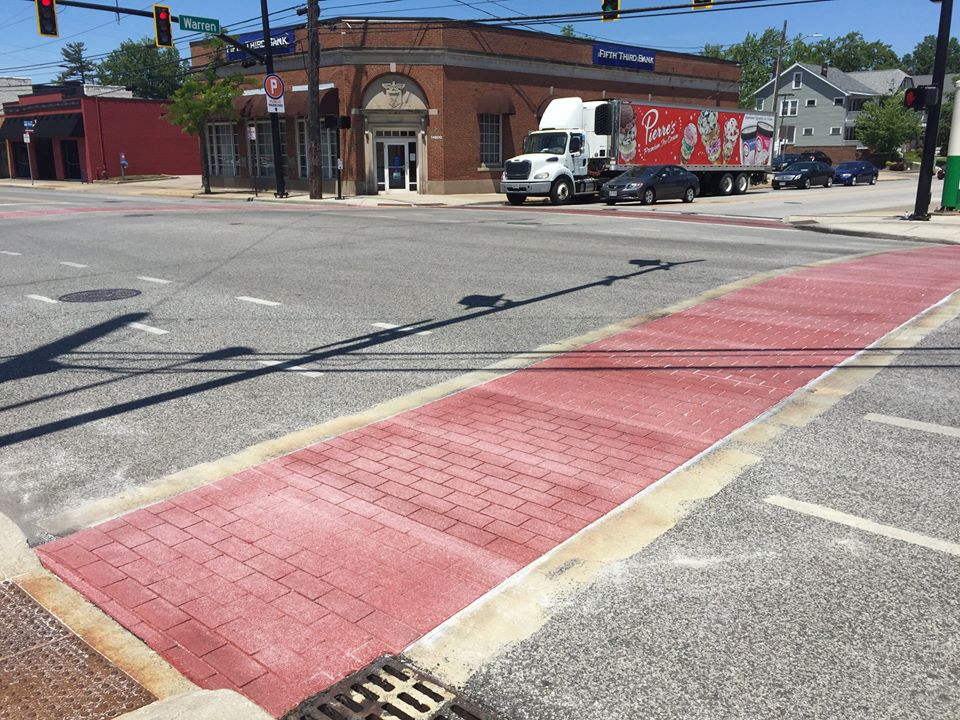