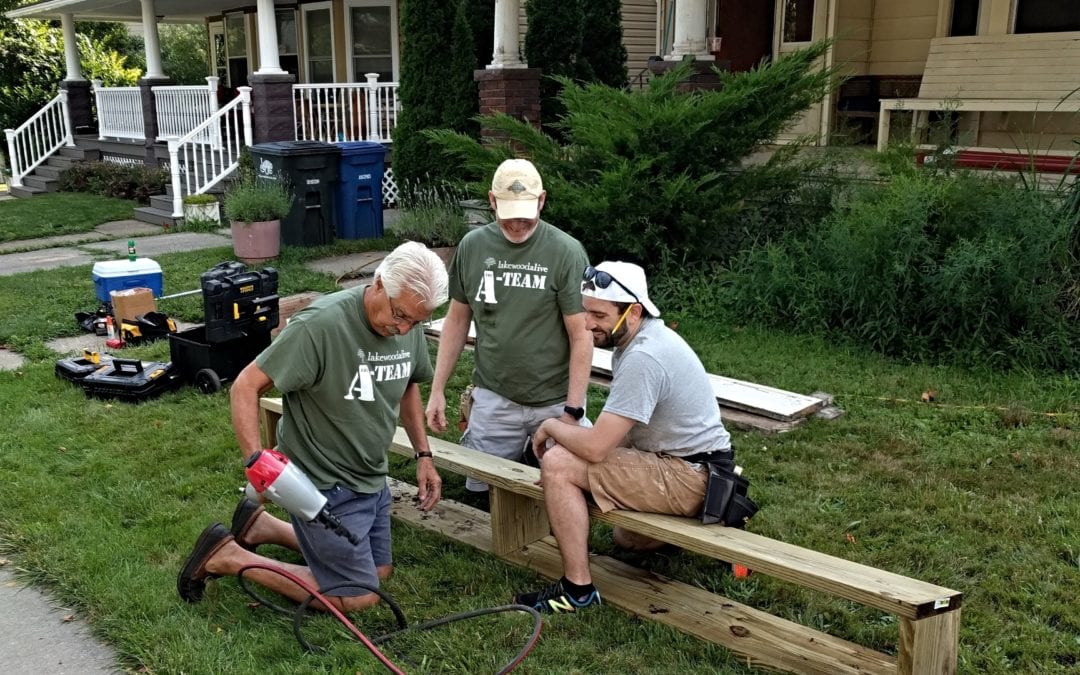 For the residents who reap the benefits of their donated labor and expertise, this ultra-dedicated group seems too good to be true.  Yet LakewoodAlive’s most experienced team of volunteers is as real and genuine as they come. 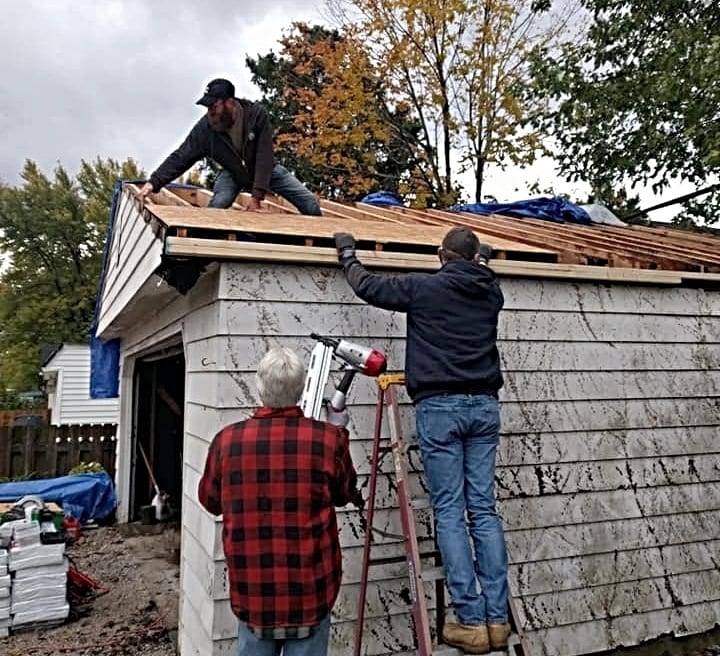 Although they vary in age (ranging from early-thirties to upper-sixties) and employment (ranging from corporate professionals to retirees), all six members of the A Team share two distinct traits: A general level of expertise with building projects and a strong desire to use their talents to help fellow community members in need.

“What we do is rewarding and fulfilling far beyond any possible monetary compensation,” said Dana, a construction project manager in his day job.  “At the end of a work session, I’m exhausted but my spirit is uplifted.  It’s a great group and there’s a really cool synergy that goes on between us.”

In Need of a New Porch

Lifelong Lakewood resident Pam Schraff knew she had a major problem.  The front porch at the Lakewood Avenue home she’s occupied for 41 years had deteriorated to the point where it had become a safety hazard, both for Pam and her visitors. 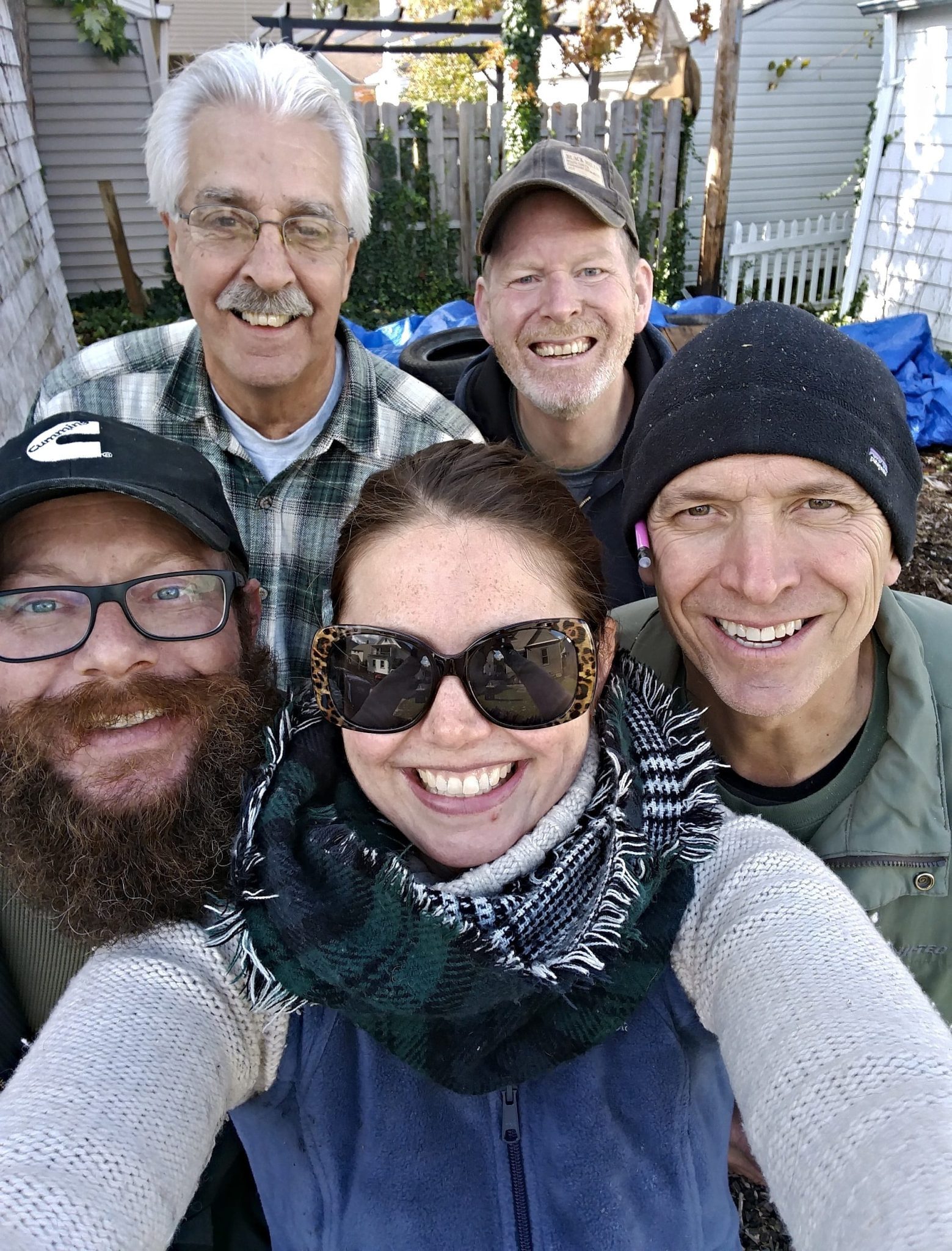 Thanks to the leadership of Allison Urbanek – LakewoodAlive’s Housing & Internal Operations Director – the group took on this ambitious project.  On six occasions between the scorching heat of July and the chill of December, the A Team convened at Pam’s home to complete an extensive porch repair that consisted of replacing flooring, constructing new porch steps, incorporating a new step railing and installing a new storm door.

“If it weren’t for the A Team, my world right now would be totally different,” said Pam, who lives two doors away from her childhood home and has spent her entire life living on Lakewood Avenue.  “They’ve renewed my ability to come and go from my home, and in doing so enriched my life.  I don’t think I can ever thank them enough.”

2018 proved a banner year for the A Team.  In addition to rebuilding Pam’s porch, the group successfully reconstructed a garage roof for an elderly couple on Rosewood Avenue by laying new sheathing and reshingling the roof.  This 1907 home on Rosewood has been within the owner’s family for nearly seven decades. 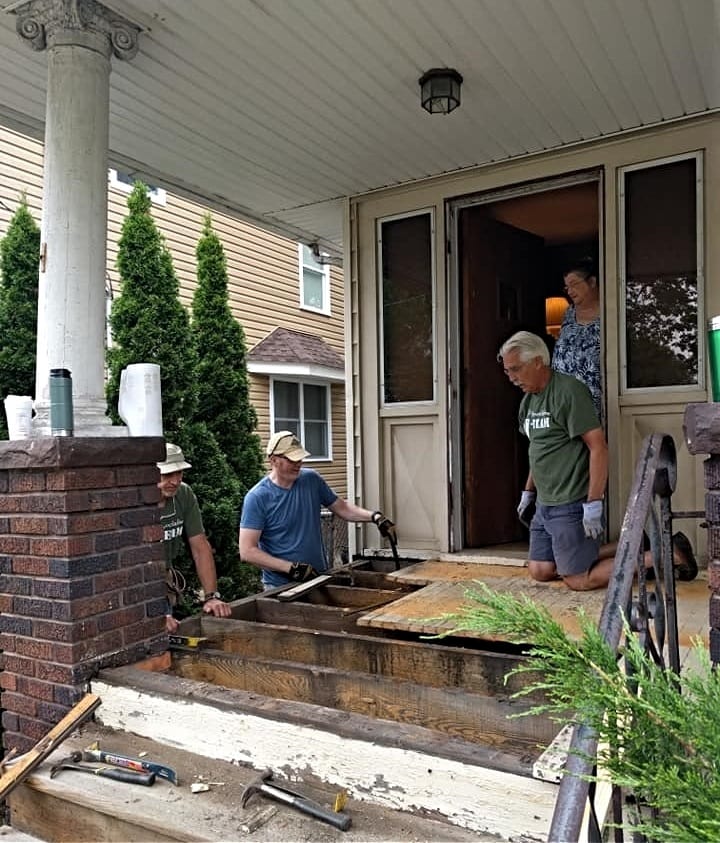 “These are projects that people normally can’t do themselves and would cost people a lot of money to hire someone,” said Jim, a retiree who discovered the A Team while exploring avenues for giving back to the community.  “It’s often more difficult to rebuild existing infrastructure than it is to build something new, but we enjoy the challenge and enjoy each other’s company.  I feel blessed to have gotten to know this group the last two years.”

In total, the A Team completed two major volunteer housing projects this year, accumulating 164 total volunteer hours and generating $12,000 worth of economic impact for low-moderate homeowners within our community.  Project materials were funded through LakewoodAlive’s 80/20 Volunteer Project Supply Fund, whereby the homeowner pays 20 percent of the cost and LakewoodAlive covers the remaining 80 percent using funding provided by First Federal Lakewood.

Fun on the Job

Despite their heavy volunteer workload, members of the A Team always manage to incorporate fun into their altruistic work experiences.  They recently celebrated their successful 2018 with a get-together during which year-end awards were bestowed: 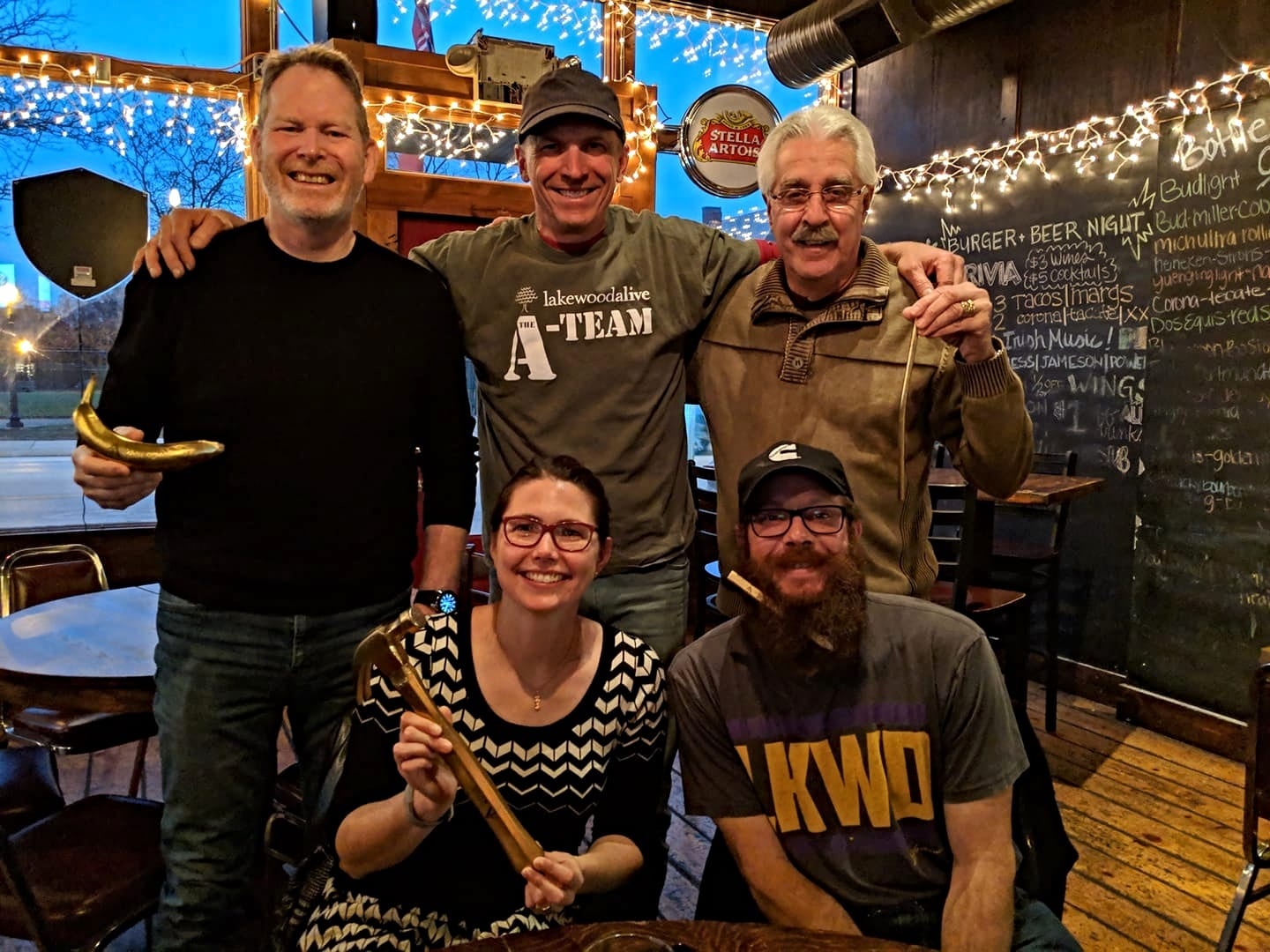 “Jim brought this awesome crockpot of chili to the last day of our project, so he definitely deserved the Golden Banana Award,” said Dana.  “But in all seriousness, this group is a lot of fun to be around.”

Pam observed the A Team’s camaraderie and knack for fun throughout the porch rebuild project.  At one point the group discovered an old grocery store sign underneath her porch and took time to investigate its historical significance.  On another occasion they found a knot in a piece of wood and took time to consider how that would impact the porch over time.

“They get along so well and they all have a sense of humor,” said Pam.  “It’s really a privilege to have received their help and I’ll be forever grateful to them.” 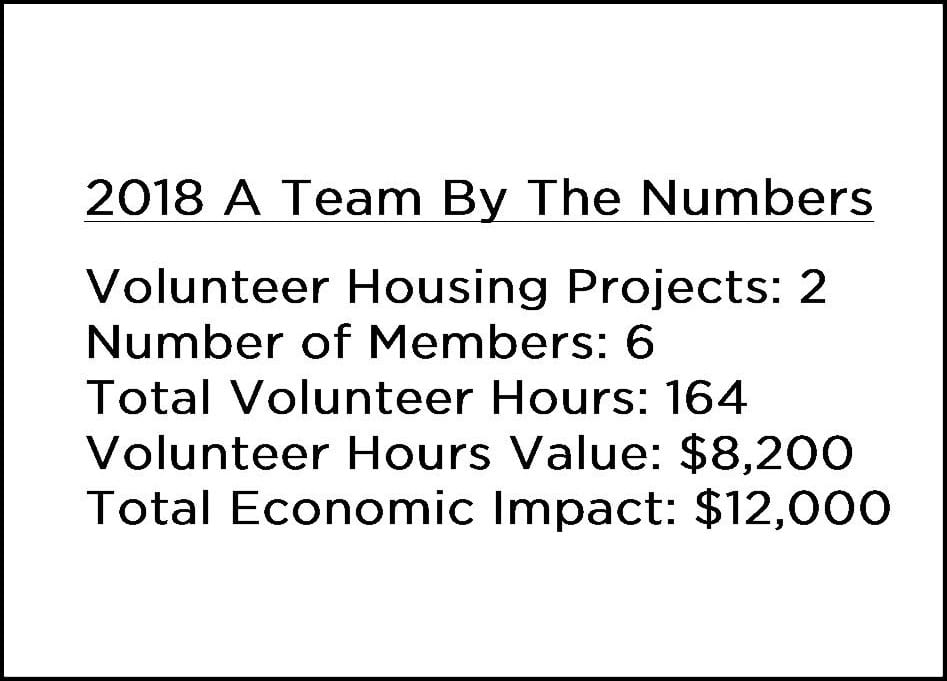 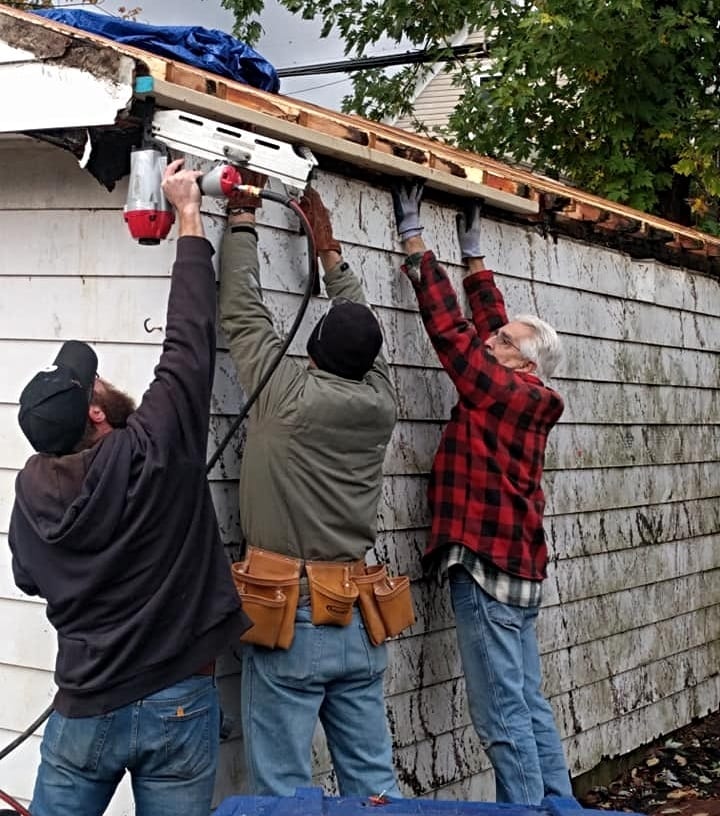