The message resonated across a picture-perfect Wednesday afternoon on Scenic Street in Lakewood.  A small-yet-impactful housing project was coming to fruition, and a celebration was in order.  As an assembly of city leaders and community members converged in the Scenic Park neighborhood that overlooks shale cliffs leading down to the Rocky River Valley, “scenic” truly was the operative word.

The group gathered on a recently-poured garage slab in the rear of a small lot to kickoff an innovative housing project.  Standing before an excavation site that will soon be occupied by a new, single-family home, they honored the start of construction with a ceremonial event dubbed the Scenic Park House Project Launch Party.  Lakewood Mayor Michael Summers, LakewoodAlive Executive Director Ian Andrews and builder Dana Paul addressed the crowd. 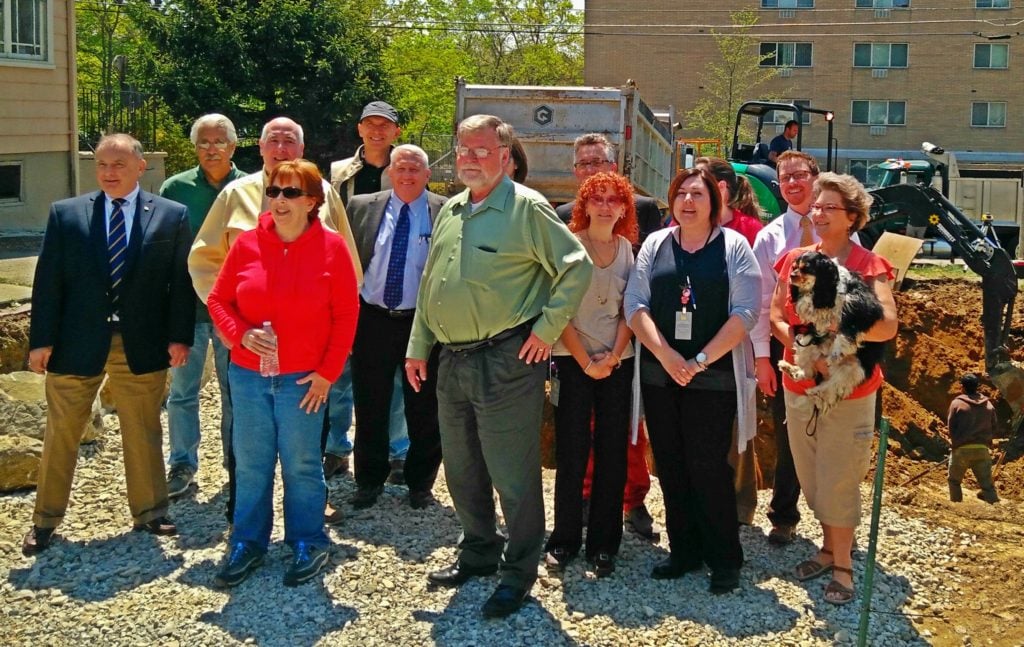 A project initiated last year by LakewoodAlive with help from the City of Lakewood and the Cuyahoga Land Bank is now underway, having progressed from blueprints to bulldozers.  Rather than focusing on the tiny size of the parcel (the lot is 35 feet wide by 94 feet deep), these organizations saw a unique opportunity to reactivate a historic street in Lakewood by transforming a vacant lot into a new home – a future residence that assuredly will be quintessential Lakewood.

“For years, Lakewood has competed against the big car, the big house and the big commute.  It’s poetic that here we have a little house going up on a little lot at a location from which you can walk virtually anywhere,” said Mayor Summers.  “I think this investment is a brilliant strategy, and I’d like to thank LakewoodAlive, Dana Paul and our partners at Cuyahoga Land Bank for making this happen.”

Paul, owner of Prairie Stone Group, began excavating the site on April 30 and plans to complete construction in nine months.  Prairie Stone Group was chosen as the developer for a single-family home at 1427 Scenic Street and took title on March 1.  Paul has rehabilitated homes throughout Lakewood for the past several years.

Although he initially envisioned a tiny house, Paul adjusted his plan as his concept grew.  Now referring to it as a “not-so-tiny house,” he intends for the new home to be 1,425 square feet with three bedrooms and two-and-a-half bathrooms.

“This is going to be a great house.  I looked at designing it from the inside-out, and I hope it’s what people are looking for when they want to live and buy in Lakewood,” said Paul.  “I can’t say enough about LakewoodAlive and how excited I was that they brought this opportunity to me.” 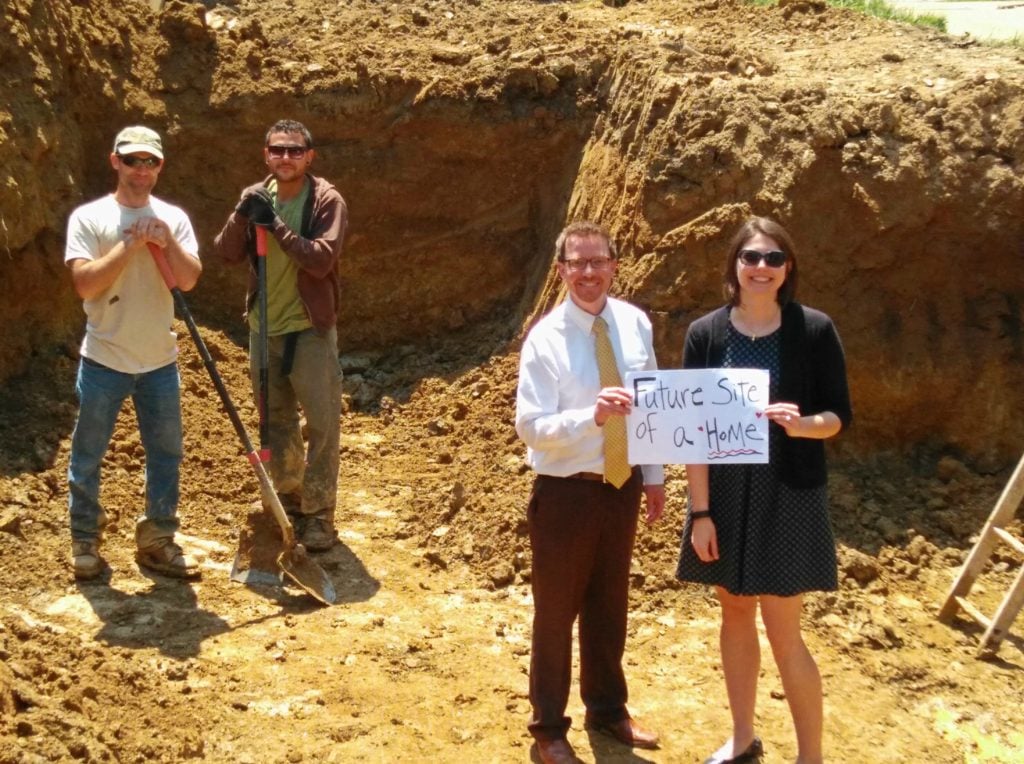 LakewoodAlive’s Ian Andrews and Allison Urbanek pose in the basement foundation of the future home at 1427 Scenic Street.

In 2015, LakewoodAlive began its Community Engagement Program with a goal of interacting with residents in the Birdtown and Scenic Park neighborhoods to connect them to resources ensuring they live in healthy and safe homes.  The community-centered organization began investigating the lot, which had been vacant and controlled by the Cuyahoga Land Bank for the past three years.

LakewoodAlive worked with the City of Lakewood and the Land Bank to determine if a single-family home could be built on the property. Once the analysis confirmed this feasibility, a request for proposals was sent to dozens of developers. The property was transferred from the Land Bank to LakewoodAlive on January 6, 2016, setting this ambitious project in motion.

Since the groundbreaking occurred prior to Wednesday’s Launch Party – and the digging of the basement’s foundation was already well underway – LakewoodAlive opted to celebrate the milestone day in a different manner.  In a twist on an old boat launch tradition, the organization had several Launch Party attendees honor the future home by breaking beer bottles over a rock at the construction site.

That his slacks were beer-splattered following the christening didn’t bother Andrews on this picture-perfect day to celebrate a new beginning for this formerly-vacant lot.  Despite the tight lot, there was clearly nothing small about this project’s scope or impact.

“The Scenic Park House Project is consistent with our ongoing mission to foster and sustain vibrant neighborhoods in Lakewood,” said Andrews.  “LakewoodAlive is thrilled to be involved with this unique opportunity to inspire a rebirth for this property and to effect positive change on this historic Lakewood neighborhood.” 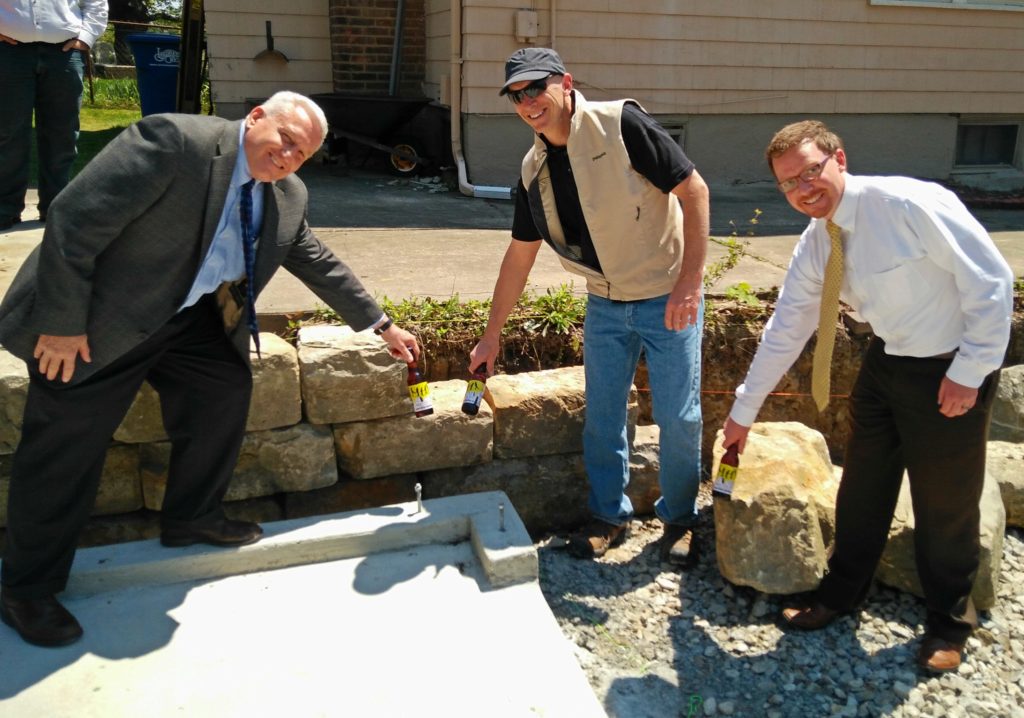 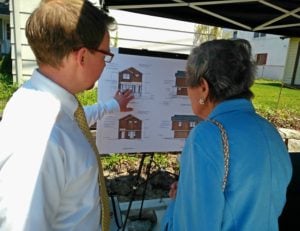 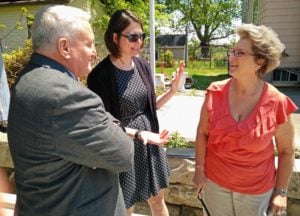 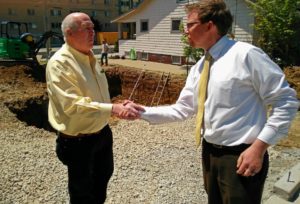 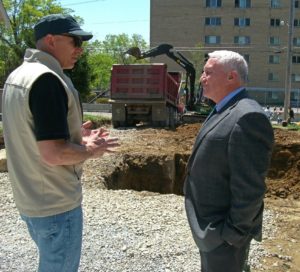 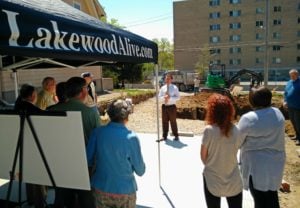 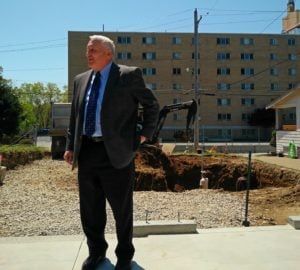 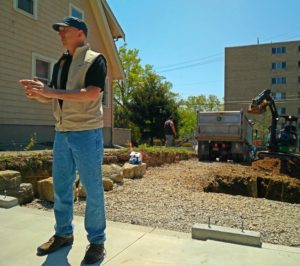 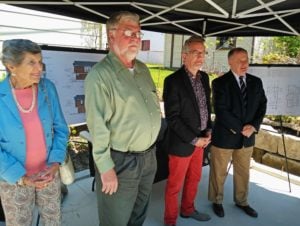 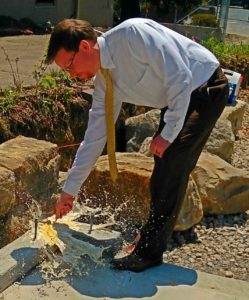 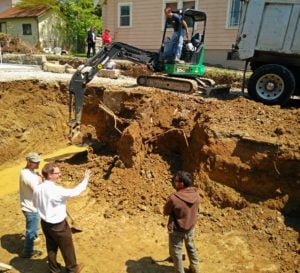 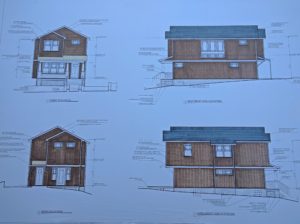