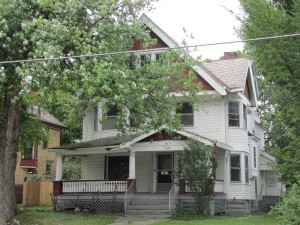 By: Colin McEwen and Ian Andrews

In 2012, the city of Lakewood bought two boarding houses that had become troubled properties in the community.

One of those homes, at 1446 Mars Avenue, was unveiled to the community at a special open house on Wednesday night.

Since 2013, the city partnered with LakewoodAlive and the Detroit Shoreway Community Development Organization to completely transform the property. A similar project is underway at 1436 Grace Avenue — also a former boarding house.

“Government action, private sector ingenuity, and marketplace trends have aligned for this great outcome,” said Lakewood Mayor Michael Summers. “This is a remarkable transformation from a major threat to this historic neighborhood, to what is now its crown jewel.” 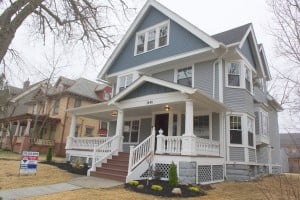 The developer, Darren Mancuso of Relief Properties, spent hundreds of thousands of dollars to breathe new life into the former 13-bedroom vacant home.

The 2,600-square-foot structure is now a single-family home. Relief Properties created an open floor plan, while preserving many historic elements including a coat tree, a set of pocket doors, original columns, a stain glass window, among other efforts.

Dozens of members of the community, including Mayor   Summers and Ohio State Representative Nickie Antonio, stopped by the home for a tour during the open house, marveling at the restoration. 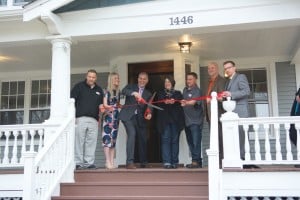 Relief Properties Owner and Developer Darren Mancuso cuts the ribbon to celebrate the completion of a near-total renovation at 1446 Mars Avenue.

“I could not be more thrilled to see 1446 Mars undergo such a dramatic transformation,” said LakewoodAlive Executive Director Ian Andrews. “None of this would have been possible without the incredible partnership of the city of Lakewood, Detroit Shoreway Community Development Organization and Relief Properties. Additionally, this house serves as an example of how a turn-of-the-century home can support modern design while maintaining its historic integrity.”

Before pictures of 1446 Mars Avenue